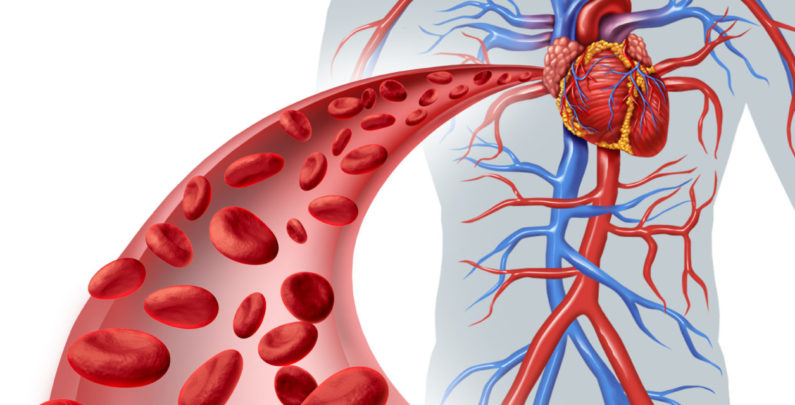 The human circulatory system serves the continuous transport of respiratory gases like oxygen and carbon dioxide, nutrients, hormones and also heat. The transport medium here is the blood, which is pumped from the heart through the blood vessels to organs and tissue and drained back to the heart. The bloodstream is a rapidly adjustable system that is essential for the maintenance of bodily functions. Hypertension (arterial hypertension) is one of the most common diseases of today’s society and countless diseases are associated with a disturbed circulation – directly and indirectly. Thrombosis, varicosis, arteriosclerosis, heart attack, stroke or diabetes just to name a few. Therefore, it is not only for physicians to know and understand the bloodstream, but in the sense of a health-conscious and preventive approach, everyone should know roughly how the circulation works and can be influenced.

In this article, we want to take a closer look at the effects and influences of pulsed electromagnetic fields (PEMF) on the blood circulation.

The term microcirculation refers to blood flow in the smallest vessels. These are composed of arterioles, capillaries, and postcapillary venules. Also included are the terminal lymphatics.

Why is microcirculation so important?

In this so-called terminal flow path, the capillary network, the blood circulation performs its main task: the exchange of substances between blood and tissue. In other words, if the micro-circulation does not work properly, this transfer in the tissue does not work properly and thus both the supply of oxygen and nutrients, as well as the removal of carbon dioxide and metabolic end products. It is easy to see which negative health causes a malfunctioning (micro) circulation can have. 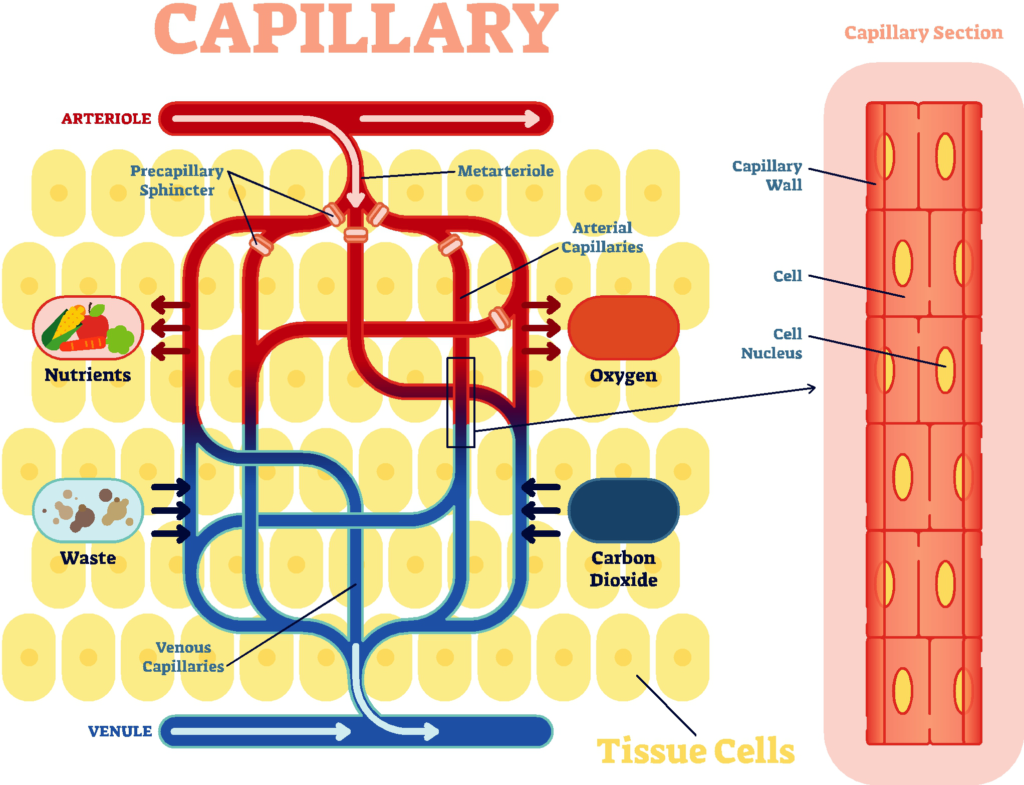 How can PEMFs influence circulation?

The positive effects of PEMFs on circulation can be explained by several mechanisms:

Viscosity is a measure of the “thickness” of liquids. The higher the viscosity, the “thicker” is the liquid. A high viscosity thus characterizes a fluid as less fluid. The particles within a viscous fluid are more bonded together and consequently relatively immobile. The blood does not behave like a Newtonian fluid, but exhibits a non- proportional and erratic viscosity and is sometimes determined by the so-called Fåhraeus-Lindqvist effect.

With the expression of the Fåhraeus-Lindqvist effect, medicine refers to the characteristic behavior of the blood, whose viscosity changes depending on the diameter of the vessel. In small-diameter vessels, the blood is, therefore less viscous, to prevent capillary stasis (congestion). In addition to the Fåhraeus Lindquist effect, many other parameters determined the blood viscosity.

The viscosity of human blood depends, for example, on:

Since there is a close relationship between viscosity, flow dynamics, and the supply of nutrient and oxygen to body tissues, blood viscosity disorders can have serious consequences on the whole organism.

Vasodilation is the dilation of the blood vessels. An abnormal or decreased production of nitric oxide (NO), as occurs in various diseases, affects blood flow and other vascular functions. In a healthy cell environment, blood vessels are constantly producing nitric oxide. In the inner lining of the blood vessels (endothelium), nitric oxide serves as a messenger to signal that the adjacent smooth muscle relaxes in the blood vessel wall, which dilates the blood vessels. The subsequent increase in blood flow leads to a decrease in both blood pressure and heart rate. Improvement of blood flow is considered to be one of the most important mechanisms for the health-promoting effect of PEMFs, including: Improve nutrient transport, repair molecules, stimulate growth factors, increase oxygen, and eliminate waste products1.

Red blood cells (erythrocytes) transport oxygen into the tissue. The number of red blood cells we carry and produce is amazing. We produce more than 200 billion red blood cells per day, which is equivalent to two million per second and they make up 70% of all cells in our body. Red blood cells are different from other cells in that they lack a nucleus, which creates more space for hemoglobin. Because they do not contain mitochondria, they do not use the oxygen that they carry. This also means that they contain no DNA and are therefore unable to repair or regenerate much. Erythrocytes form in the bone marrow and have a lifespan of about 110-120 days before being degraded and absorbed by the body. Through all the underlying mechanisms involved, PEMF therapy may favor the formation, function and absorption of red blood cells.

Like all membranes, the membranes of erythrocytes consist of lipids and proteins that allow maximum flexibility as the cells move through the circulatory system. Most of the oxygen transfer takes place in the microcirculation system, which mainly consists of capillaries. Capillaries are so incredibly small (5 to 10 μm in diameter) that the red blood cells (7.5 μm in diameter) must be deformable to push through.

A phenomenon called the “rouleaux effect” can make this process difficult or impossible. A Rouleaux formation consists of a stack of red blood cells that stick together. It resembles a stack of coins and is therefore commonly referred to as “roll forming”. Due to the disc-like shape of erythrocytes, they are somewhat predisposed to this type of clumping. Capillaries can each pass only a single red blood cell. Therefore, it is necessary for healthy blood circulation to prevent a “rouleaux effect” as much as possible. Because PEMF therapy enables a balanced cell membrane charge, it has a direct impact on this effect. Properly charged red blood cells repel each other. Apart from preventing the “rouleaux effect”, this separation of red blood cells allows for a larger available surface area for oxygen and nutrient uptake and exchange. In addition, magnetic fields appear to enhance the release of oxygen from hemoglobin, with exposure of only ten to thirty minutes increasing the rate of release of oxygen for several minutes to several hours 2.

PEMF therapy addresses many of the mechanisms that lead to increased blood viscosity and blood clotting, including the reduction of platelet adhesiveness, the reduction of fibrinogen and the improvement in fibrinolysis and the enhancement of red blood cell deformability (making them easier to move through capillaries. These anticoagulant effects seem to be the case for virtually all types of PEMFs 3.

The edema is a swelling caused by excess fluid in the tissue. Edema tissues get rid of oxygen, nutrients and circulation. PEMF therapy has a positive effect on swelling and edema by improving cell metabolism by acting directly on the sodium-potassium pump in the cell membrane. Any type of cell or tissue damage causes edema due to leakage of fluids from the cells and blood vessels. Improving the circulation helps to remove this excess fluid and prevent further accumulation of fluid. Anti-edema effects are rapid after using PEMFs 3.

PEMFs not only improves blood circulation but also has a positive effect on lymphatic vessels, stimulates lymphatic drainage and reduces the production of lymphoedema, thus simulating the immune system and correcting the edema 3.

Inflammation is the body’s defense against cell injury, regardless of the cause. The goal of acute inflammation is to contain and eliminate the irritant and initiate the repair process. There are three stages to the acute inflammatory response: vasodilation (enhanced by PEMFs), increased vascular permeability (enhanced by PEMFs by promoting action potential and ion flow), and white blood cell transmission and accumulation at the site of injury.

A chronically inflamed tissue is like a swamp – there is only a little fluid flow and therefore little drainage. By increasing the blood flow through vasodilation, the environment of the swamp changes considerably. PEMF therapy also increases the production of growth factors that help combat inflammation.

Low oxygen concentrations cause cell damage, with the severity and duration of oxygen deprivation in tissues indicative of the degree of damage. The vast majority of cellular functions depend on adequate oxygenation. PEMFs can significantly increase oxygen levels in tissues by improving blood circulation, helping the body carry oxygen from the air into the lungs and into the blood, and positively affect the ability of hemoglobin to transport and deliver oxygen.

Another study was performed on patients with terminal emphysema. These patients received PEMF therapy (30 minutes per day for seven days) in addition to their usual medical care. The addition of magnetic field therapy improved blood oxygen levels by up to 21%, and all patients reported subjectively better endurance. It is conceivable that these results would have been even more significant if the treatments were performed earlier in the disease and for a longer time 4.

One of the earlier demonstrations of the benefits of PEMFs to improve oxygenation was made in the early 1990s in Germany with a large PEMF plate. They found that PEMF effects can be enhanced during periods of high muscle activity, alcohol intake, sleep, or after inhalation of CO2. Hyperventilation and large meals would reduce the level of impact. In their studies, they found that the blood volume increased, the oxygen content was boosted and the pH became more alkaline 5.

Contact us anytime, we are just a phone call away to assist you!