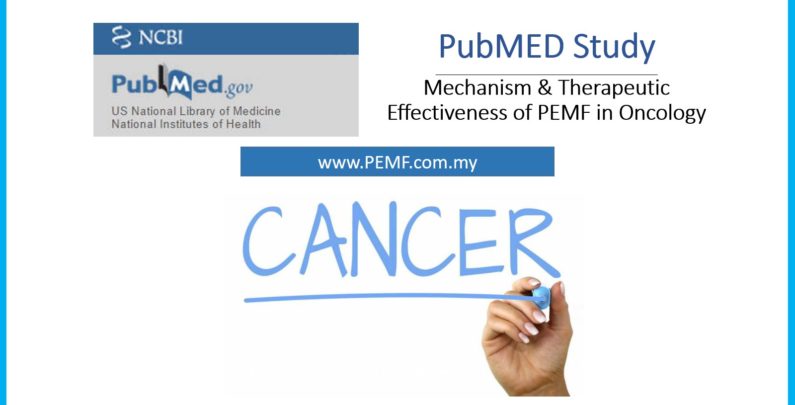 Cancer is one of the most common causes of death worldwide. Available treatments are associated with numerous side effects and only a low percentage of patients achieve complete remission. Therefore, there is a strong need for new therapeutic strategies. In this regard, pulsed electromagnetic field (PEMF) therapy presents several potential advantages including non-invasiveness, safety, lack of toxicity for non-cancerous cells, and the possibility of being combined with other available therapies. Indeed, PEMF stimulation has already been used in the context of various cancer types including skin, breast, prostate, hepatocellular, lung, ovarian, pancreatic, bladder, thyroid, and colon cancer in vitro and in vivo.

While complementary and alternative medicine (CAM) is not generally considered part of conventional medicine, it has been widely used in the Oncology field as an add‐on therapy to control patients’ symptoms and improve their quality of life. The beginning of the 20th century saw the first therapeutic applications of CAM therapies for cancer treatment, which includes Pulsed Electromagnetic Field (PEMF) therapy. In this review, we have focused on PEMF therapy, a noninvasive technique characterized by electromagnetic fields inducing microcurrents to the entire body or locally to target specific body tissues. Indeed, PEMF therapy can be used as an adjuvant treatment to chemotherapy and radiotherapy with the aim of reducing their dosage, mitigating any harmful secondary side effects, and enhancing patient’s prognosis.

The specific claim, supported by the described in vivo studies, is that all treated groups showed slower tumor growth rate if compared with untreated control group, confirming that PEMF therapy can modulate the physiology and electrochemistry of cancer cells and influence cell membrane systems and mitosis. In addition, PEMFs induce some changes in membrane transport capacity through impacting the osmotic potential, ionic valves and leading to a reduction in cellular stress factors, increase in the rate of DNA transcription, and modulation of the immune response.

PEMFs have also an immunomodulatory effect, as supported by in vivo evidence showing an increase in tumor necrosis factor-alpha levels that induce an anti‐tumoral response, leading to the activation of a proapoptotic pathway induced by caspase‐8 interaction with Fas‐associated death domain, in the spleen of the murine melanoma mouse model after a 16‐day therapy 78. Changes in blood pressure, skin electrical resistance, and pulse amplitude in 163 oncology patients exposed to tumor‐specific PEMF frequencies have also been reported suggesting that PEMF therapy does not only target neoplastic cells, but may also have systemic effects 15. However, long‐term PEMF treatment in HCC patients is not toxic, confirming the safety of PEMF therapy that employs 100,000 times lower frequencies if compared with radiofrequency ablation that is also employed for treatment of HCC 55.

“In conclusion, two clinical studies have used PEMF therapy for cancer treatment. These studies show that PEMF therapy is safe and promising compared to other available cancer therapies. In the future, PEMFs could be used not only as primary therapy but also in combination with other common antineoplastic therapies. Given that new portable and affordable PEMF devices are increasingly available on the market, future controlled clinical studies are expected to further determine the potential of PEMF therapy in oncology.”

To read the full PubMed Study

To learn How PEMF Helps The Body To Heal Itself, click :

10 Ways PEMF Helps The Body To Heal Itself